“Rants of a Patient Safety Advocate”: Stories from the Bedside

Ilene Corina BCPA, leading national educator and campaigner for patient safety, has published a collection of her stories from the bedside. Titled Rants of a Patient Safety Advocate, the book —a no-holds-barred account of the fight to improve medical safety standards in America — has its origins in Corina’s blog of the same name.  The blog has hundreds of stories from her years of activism and advocacy. Editing was done with support from Mary Redler, also a 516ads.com member. 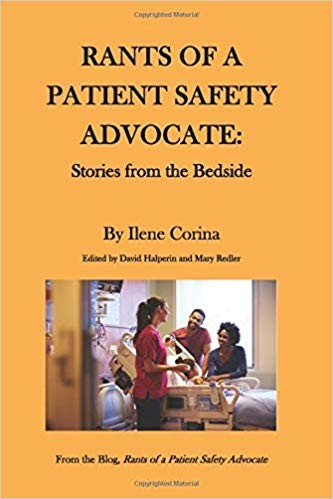 Corina says, “Following the death of my young son in 1990 after a tonsillectomy, I learned that medical errors are a serious problem in the United States. By attending medical conferences and throwing myself into the ‘how and why’ of medical injury, I felt empowered to do something to change the system that allowed him, and hundreds of thousands of other children, brothers and sisters, parents and friends, to die or be seriously injured because of the complexities of the healthcare system.”

The book includes short easy-to-read stories about The Advocate’s Role, Accountability, Health Literacy, Transgender patients, and even a story presenting another perspective on the opioid crisis as well as a chapter providing tips on being a patient’s advocate or support person.

From the hidden meaning of hospital “report cards”, to the bias experienced by vulnerable patients, to the role of the patient advocate, these real-life anecdotes and opinions reflect Corina’s decades of experience as an organizer, community educator and hands-on advocate for hundreds of patients. Other typical chapter titles: “Choosing a Hospital,” and “Give the Patient a Voice”.

Corina is a speaker, educator and a patient safety advocate who has spoken at more than 100 medical conferences, been interviewed by numerous television and radio shows and has won awards for her work. But her greatest love is as a bedside advocate and support for patients and their families.

Learn more about Ilene Corina at www.icorina.com and about Pulse Center for Patient Safety Education & Advocacy at www.pulsecenterforpatientsafety.org